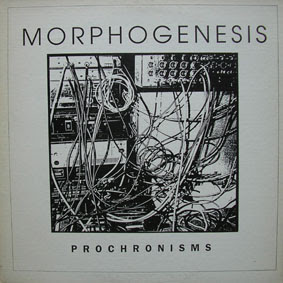 "The group was formed in 1985 by individuals interested in exploring the possibilities of live electronics and collective improvisation. The members have diverse musical backgrounds, including teaching electonic music at Morley College and playing in other groups ranging from Cornelius Cardew's Scratch Orchestra, Nurse with Wound and Organum." The band includes, on this record: Adam Bohman (prepared violin, balakaika, objects), Ron Briefel (sound projection and Atari ST computer), Clive Hall (percussion, live electronics and sound projection), Micheal Prime (shortwave radio, bio-acitivity translator, water machine and live electronics), Fred Sansom (prepared guitars, live electronics) and Roger Sutherland (piano, percussion and Atari ST computer). Of these Prime is the most active one as solo musician. Sutherland commited suicide in 2004. Before this album they had a cassette release and then in nineties only a handful CDs followed. Nice improvised electro-acoustic music.

i would say adam bohman isn't very unactive as well, organising improv gigs in London, releasing records and cd's under his own name and with the Bohman Brothers & Apricot My Lady as well...

dead link. could you replace it, please?