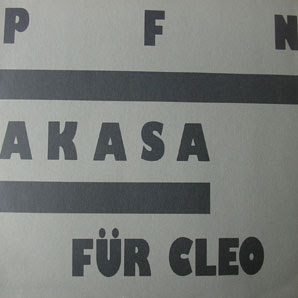 PFN is the duo of Monika Westphal and Hajsch from Cologne (Germany), both also running the Quiet Artworks label, of which more later on. They released only four cassettes, which I don't have, and this absolute great LP of slow drones and acoustic instruments (violin, cello, saxophone and clarinet). There are several softer parts which may not have translated well to MP3, but it's certainly some record to buy if you come across it. After this LP they didn't release anything as PFN anymore. I believe both were members of Kontakta, and Hajsch also made a solo LP (also to come later on) and several works with C. Schulz.