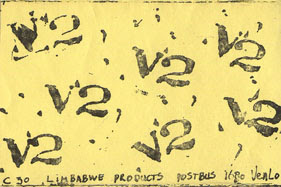 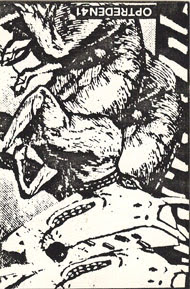 As promised some time ago, the final tape releases by Der Junge Hund, the free jazz combo from Eindhoven. Vervormd in V2 is a recording from a year which I can't read on the cover. It looks like 1981, but that can't be, since V2 didn't exist back then. It shows Der Junge Hund in a raw spirit. Optreden 41 seems to be towards the end of their career and is much more quiet and subdued, and actually a very fine release.

A friend of mine, who is 'in the know', had problems sending a comment, so i'm posting it as part of this post:

"V2 DID exist in 1981. It is the year they started at Vughterstraat 234 in 's-Hertogenbosch. They were called V234 in the beginning. That later became V2 under influence of how visitors started calling it. There were concerts but also exhibitions with anarcho art. One guy made a cardboard sculpture in the format of a rocktet, that resembled the german missile.
It all started very low-profile with musicians and artists that were personal friends (as was quite common amongst "artists initiatives" in those days) and the members of Der Junge Hund certainly were.
AV'

Optreden 42-aide A is missing?

i just checked via a download myself, and indeed that a-side seems to be zero kb. very odd. i will correct this asap