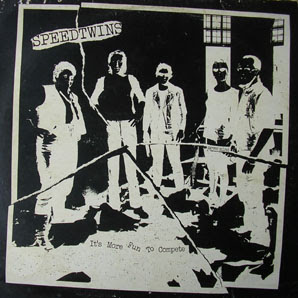 One of the first Dutch punk band, from Arnhem, with an english singer Jody Daniel. They were a band who decided to play punk, rather than punks who started playing punk music. Such as other of the earlier punk bands. They started at the end of 1977 and in 1978 already released this LP 'It's More Fun To Compete', which is not the real punk thing of course. The album was released by Universe on transparant vinyl, but later re-released in a different mix by Philips. This post is the Universe one, produced by Alfred Lagarde. Speedtwins released some more 7"s (including a cover of Who's 'My Generation', which is also on this record. in 1978, changed line up and Jody Daniel died in a motor accident in the early eighties, which effectively also ended Speedtwins.