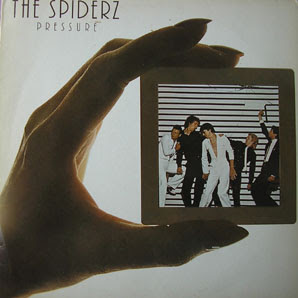 Some of the punk bands started from scratch, but some evolved from pubrock. The Clash in England, and in The Netherlands, The Flying' Spiderz did the same, this becoming the first punk band. In the punk days they released two albums and various 7"s, and had a fierce live reputation. They were dumped by EMI and the band dropped the name Flying and just became The Spiderz. This post is their first album (or third) 'Pressure', when the band progressed into a more power pop/new wave sort of sound. It's produced by Laurie Latham. They will also released a fourth album, which I don't have.

Hey, thanks a lot for this 1.From sunny P.R.

reminds me of the 70s glam band jet. great stuff! thanks so much for all of your uploads, I have been slowing going through and really enjoying it all!