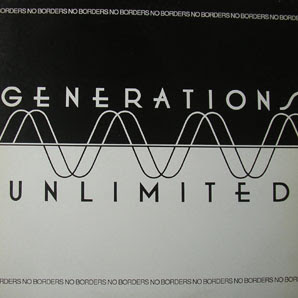 And while on the subject of Generations Unlimited, here is another of their releases, the compilation 'No Borders'. Eleven pieces by artists that were closely related to Conrad, Gen Ken and David. Rollkommando is Conrad's son, Jörg Thomasius made several collaborative works with Conrad. Arcane Device is from NYC, Michael Chocholak worked with Conrad. I don't know about Charles Cohen though, or where Morphogenesis fit in. Same about Stefan Tischler who was once in Port Said with Keeler. Finally Iancu Dumitrescu had an album on this label later on. A nice varied album of electronic music in the Schnitzler sense and some more experimental sounds.

Hey thanks for this. Sounds good. Hadn't heard it in ages. This LP helped bring down the Berlin Wall!