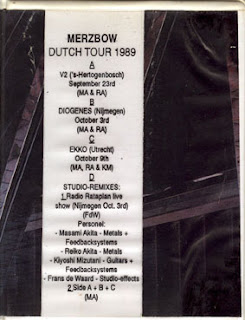 The first proper Merzbow Europe tour was held in 1989 and was organized by V2. It brought Merzbow to three Dutch cities and to Bordeaux. The first two, in 's-Hertogenbosch and Nijmegen, were just Masami Akita and Reiko Akita. It's on this tour that Merzbow started the harsh noise sound that he further developed in the decade after this on countless CDs. This tour also provided him with material he used on his first ever CD release, 'Grand Cock OO Grand'. The three Dutch concerts appear in full length (I believe, I only saw the one in V2 and Diogenes), each on a side of a tape. The fourth side has studio remixes of a concert at the Nijmegen squat radio by Merzbow Kapotte Muziek (remixed by Frans de Waard) and a remix of the three live sides by Masami Akita. The video styled box has a metallic construction inside with a contact microphone. Merzbow used them on the night he got some copies handed by the V2 people. I believe that was in 1991. Might have been 1992.

thanks a lot for this one. ive been waiting

not on my copy. i didn't cut anything. what is on the tape, i copied. no cuts