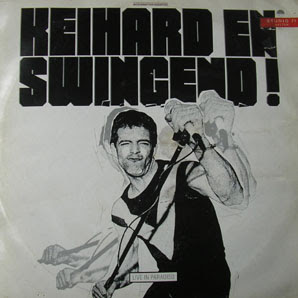 Punk captured by the majors, EMI of them all. Perhaps the bands on this live album aren't all real punks, but it was presented at such. Recorded live in Paradiso on 12, 13 and 14 Februari 1978, so that is today exactly thirty years ago. Wow, small coincidence there (I hadn't planned this, as I was merely playing Mgr Ubu records in a row, and this is the final one). Writing credits for Sammy America's Gasphetti goes out to Sammy America (still active these days) and Henny Vrienten (later of Doe Maar). Other bands include The Nits (who just released the nineteenth album, I believe), Subway, Suzannes, WHizz Guy, Suzannes, Panic, Captain Coke, Sylph, Turf, Cilinders and The Lizards.

so i don't know where to put this so it's going to go here. a little while back, actually maybe a long while you posted some merzbow cassettes, specifically "aka meme". i remember you saying that you had something like a "dutch tour" copy that featured live performances. that would be awesome if you could post it. if not, totally cool.

oh and i visit your blog often and find it both helpful and interesting, so thanks

good to hear from you. yes, that 2tape set by merzbow I must do, hopefully soon. but this blog is a mere hobby, so i can't do more than 1 post a day. but now that most Dutch things have been done, it's time to look further. and some more merzbow no doubt.

oh dear, you can tell this is a major label release just by the cover. I haven't heard it yet but I'm on my guard. Are there any tracks recommended?

more info about this album
http://www.discogs.com/release/903412