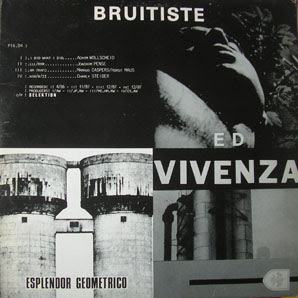 I already posted the cassette releases that came with the super limited cassette edition of this 2LP set before, and promised to do the real thing too. Here it is. Bruitiste is a double LP featuring four (one per side) noise artists which one could consider to the best of those days. Vivenza and Esplendor Geometrico take their inspiration from Futurism and Etant Donnes and P16.D4 more from musique concrete. The P16.D4 track (actually left as one track, since it was hard to separate into four) appears also on the CD 'Three Projects' on that RRRecords released by them, but I recorded it off vinyl. P16.D4/Vivenza are in zip one, Etant Donnes and Esplendor Geometrico in zip two.

Thanks for this one! I have the vinyl (recently played some of it on KFJC during a "cassettes of the 80s" special even though it's not a cassette) and this saves me the time of digitizing it. Thanks very much. This is an all-time classic.