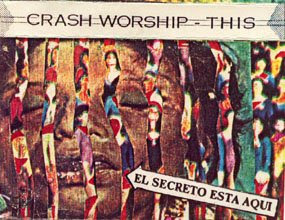 "Crash Worship's live shows are infamous for their unrivalled chaos and unlimited celebration. Led by a strong trio of drummers, the band creates an atmosphere of bacchanalia. Their recordings explore different aspects of rhythm and psychedelia." 'This' is the second tape release by them. Later the band released a bunch of CDs and vinyl, all which didn't have for me the same power as 'This' - and which I thus no longer have. Main man Marcus Wolf later was a member of Blood Axis with former Coup de Grace main man Micheal Moynihan.

dear 433,
any chance of posting adrv's 'live 95' cd capured frm pague in prague if you got it lying around somewherrs? to me it's the most accurate representation of the crash worship live sound ever recorded. i used to have a cdr of the thing but it's thousands of miles away from my hungry ears, provided it still exists that is. 'live 95' was purportedly later reissued in a less limited run called 'the gods are'. anyhow i've discovered much glorious musics previous unkown to me by virtue of this fabulous site you're kind enough to share w/ peeps & i've never said thanks so, keep it up. cheers
anon y mous

Thanks for posting my Holy Grail. I've been looking for this for 15 years.

Thanks for posting this. You might want to check this out:
http://rapidshare.com/files/125728403/Crash_Worship_-_Pyru_-_Remix.rar.html

It's Remixes of Pyru. A friend of mine bought it at one of there shows.