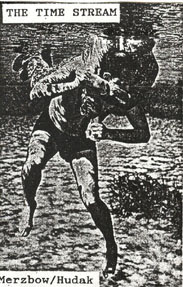 The master of noise versus the master of silence? I am sure it was never advertised as such, but it could have been. Merzbow you now heard; Joh Hudak: "Born 3 28 58 Framingham Massachusetts USA. John Hudak has been interested in sound and music from the age of four when he began to play a variety of instruments. At the University of Delaware (BA, English 1981) and Naropa Institute for the Arts (1979), he studied video, photography, creative writing and dance. He then began to create taped soundtracks for his solo performance art pieces. In recent years, he has concentrated on sound, particularly natural sounds. Hudak's current sound work focuses on the minimalism and repetition of sounds below the usual threshold of hearing, sounds that are filtered out or considered non-musical. These sounds are recorded, deconstructed and processed, their rhythms and textures being the basis for aural manipulations."

I find myself very engaged by Merzbow's...slower-growing, more 'organically' developed works...
This is a great example of those.
I've really been enjoying this.
Thank you for it.

Any other suggestions in or near this realm of noise(s)?

I meant to add a comment months ago. Thanks for this, possibly my favourite Merzbow release. I love Hudak's gentle contrast to Akita's harshness.

THX!
Both are Great musician!