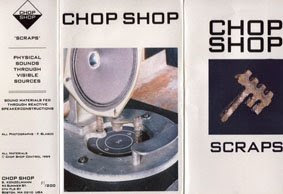 Chop Shop is the work of Scott Konzelmann, who plays 'industrial music' which he makes using all sorts of installation like art pieces. Speakers and such like, through which he feeds his raw sound. 'Scraps' is a self-released tape. Other releases have been on RRRecords (a.o. one between steel plates), V2 Archief and Banned Production. His last release was from 2006, but in this century he is not as active as before.