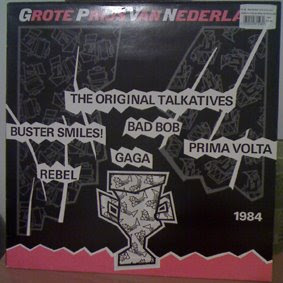 A while ago we had the first album that was part of De Grote Prijs van Nederland, a rather stupid competition for rock musicians. Ok, so I was wrong about the first year (1983); it had some nice music. The same Mic donated also the version from 1984, which is already a bit downhill for me, but I want you to judge for yourself. It has ska by The Original Talkatives, proto-alt.countryby Rebel, wave/rock by Buster Smiles, wave by Prima Volta, Garagerock Bad Bob and the winner was Gaga, who played afrobeat and of which later two members went to join Urban Dance Squad.