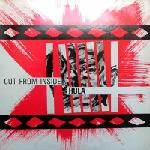 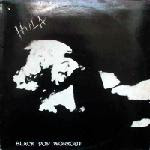 From discogs: "The Sheffield based band Hula was founded in 1981. Three members (Mark Albrow, Alan Fish and Ron Wright) lived with Stephen Mallinder (Cabaret Voltaire) and Paul Widger (They must be Russians, Clock DVA, the Box) in a villa called Hula Kula. After trying the bass players Alan Watt, the notorious Chris Brain (Tense, NOS) and Mark Brydon (Chakk, Moloko), and after the replacement of Alan Fish by Nort (both drummed for the Cabs), Hula recorded the impressive album Murmur. Ingredients like cut ups, steady rhythms, and paranoia vocals were blended together into a unique white funky sound.
Hula recruited John Avery as a bass player. A bass player was necessary for the exciting live shows with lots of video material (Peter Care). Hula continued to bring out danceable 12 inches and more experimental albums. With this line-up Hula was more or less successful. International tours were made. Radio sessions for VPRO and John Peel were recorded and broadcasted. Being a support act for Depeche Mode implied performing live in Wembley Arena for huge crowds. After Nort left the band in 1986 the music changed, but still remained interesting. Later on Mark Albrow quit as well. When their record cohttp://www.blogger.com/img/gl.link.gifmpany Red Rhino went bankrupt they moved on to Wax Trax. They released the last Hula record: a Jimmy Hendrix cover of Voodoo Chile. The 12 inch did not sort out the desired effect. Jo Cammack joined in officially and they made new songs in 1991. Intimates say it is the best Hula ever made. For the public it is hard to judge, for the material is still in the vaults of the studio. Eventually Hula broke up."

Oghh this is GREAT! Do happen to have the one with the live performance that was used during an exhibition?
Been searching for that for nearly 20 years now :-)

if you mean 'shadowland' yes, i have that one (and selling it also)

Huzzah! I used to have several of these 12"s, although my fave was "Black Pop Workout."

yeah!Been searching for that for nearly 20 years , waitin for rest

THANKS ! This is the Holy Grail for me, been hunting Hula down for years now.
I bought all this stuff on vinyl as a kid, but it's on the other side of the world with my parents.
Your already superb blog just got even better.

Thanks a lot, I love Hula and is one my favourite bands of 80`.Nice blog,Thanks again.

I can only say, having written about this superior lost band for my friend's blog it's heartening to see so many other people loved Hula as much as I did. DThompson says Great job posting all this!

Thanks so much for filling in one of those unfortunate gaps in my collection that I never expected to fill. By the time I 'discovered' Hula, the countdown to oblivion had already started. I bought everything I could find at the time, but it wasn't much of course...

Well there eventually was that "Best of Hula" CD, but it was more an autopsy than a celebration of Avery/Wright/Albrow/Nort...

I never even found the great Poison single: Poison (Club Mix) ... what club was that though?

You can browse my disappointing Hula collection and other classic vinyl at discogs.com.

And what would a post about Hula be without a link to soureden.com? I can't help but respect the fan made shrine to the boys from Sheffield, even if it hasn't been updated in over ten years!

Thank You in advance

Interesting music on your blog by the way :-)