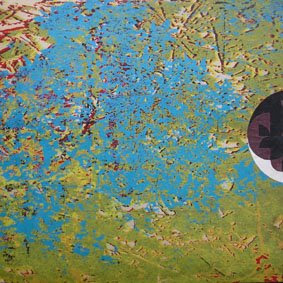 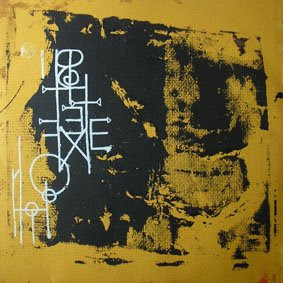 Certainly one the strangest bands I post about. It's mainly the work of one man, Abo, who lived back in Seatlle, where he had a label (Petri Supply), which also acted as a mail-order. His few releases (these two, plus a cassette, which I may have if I can find it) are highly cryptical releases, but with elaborate packaging, heavy silk screened covers, but no information. The 7" contains also a 10", 78 rpm record. The music on the 7" is created using the 10", of which he had 114 different ones, thus the total edition. On discogs we read about the LP:
"Released in an edition of approximately 500 copies on marbled grey vinyl and packaged in a screen-printed gatefold jacket. Both the inside and outside of the jacket, as well as the inside and outside of the inner bag were screen-printed (which means that all the copies are a little noisy due to contact with the printing). The gatefold sleeve also incorporated black and white contact sheets of the Madrona tree used in the recording of the album. One pocket of the gatefold includes leaves and/or branches from the tree used in the recording. The gatefold was closed by a circular sticker.
The original recordings were made over a three day period of the summer of 1989 at a rural location in Whidbey Island. Studio preparations were done at Incubator, and final mixdown achieved at Electric Eel recording studio. The second side was backwards out of phase version of the first side, meaning that theoretically if you played both sides at the same time, the sounds would cancel themselves out.
Aside from the 500 or so copies of the regular edition, there were about 60 which never had covhttp://www.blogger.com/img/gl.link.gifers and remained in storage until June 2000 when Abo handmade completely different assemblage covers and labels for them. These copies also included new liner notes explaining the project. Each copy had a unique cover. Almost all of this "second edition" was sold through Anomalous Records."
Petri Supply also didn't release much either: there is the Yeast Culture cassette, a 7" co released with Korm Plastics and Selektion, a Kapotte Muziek LP, a Hands To LP (speaking of weird packages - wow) and Circusirus, a triple 7" package, which I still have problem figuring out who is who. I may post the Kapotte Muziek and Hands To LPs in the future.

Thanks so much for posting this! I own the LP, but do not have the 7". Were you to post the tapes, I would be most grateful. It probably does not surprise you to learn that Alluvial is a fan of this project, but these releases are impossible to find! I think I may have one of the extra 60 copies you mention that were found and released later. The packaging is extravagant and the LP is very hard to get out of the sleeve. Best, Kevin

heh, i'm the same with kevin, i own the LP but not the 7". i didn't even know there were other releases or even know anything about the artist for that matter! i bought my copy from RRRecords mail order back in 1990 after hearing an excerpt on "the no other radio network" show in berkeley. i loved how the sleeve contained leaves and branches which depicts the sounds of the LP wonderfully!

Hey kevin, do you still have thatt extra copy? i would love to have one, it's a really cool record.