Kaiser Nietzsche - Non Plus Ultra (tape, Freedom In A Vacuum, 1989) 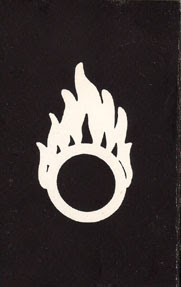 Towards the end of the eighties there was a growing interest from the industrial musicians in musique concrete, and some groups started to play music that was loud but more musique concrete, like THU20, P16D4, P. Children and also Kaiser Nietzsche from Canada. This trio of John Kamevaar, Thomas Handy and David Scurr only released three tapes, one LP and one split LP with Yuzuru Syogase (which is, I think still available on CD by Artware). Non Plus Ultra is their final cassette release. Only of Kamevaar I heard some more music in the middle part of the nineties.

wonderful to see this tape around! have intended to check it out for a long time, but never had the chance. I have another tape on freedom in a vacuum as well as this heterology lp. it would be nice to see some more of the freedom in a vacuum releases (and re-releases as well!) uploaded. in particular the black dwarf reissues!

you who are interested in dutch tape culture maybe are familiar with a band called psychomania? I have a tape that was distributed through broken flag... experimental noise / power electronics with some female vocals. can rip this if you don't have it. what about some more 6de kolonne-related rips?

i have that first comp lp on freedom and maybe one other Kaiser tape, but not the dwarf series.

ah psychomania... i worked in the same office as one of the guys from that for years and know all about him, but i don't have the tape. good of you to ask, so i can bug him...

also 6de kolonne i may not have more, except for some more MTVS - will come soon