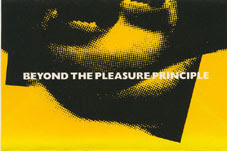 This is the first of two posts with the tapes by Gregory Whitehead. " Gregory Whitehead is the writer, director and producer of more than one hundred radio plays, essays and acoustic adventures for the BBC, Radio France, Australia’s ABC, NPR and other broadcasters. His plays have won numerous major awards, including a Prix Italia for Pressures of the Unspeakable, a Prix Futura for Shake, Rattle, Roll and a Sony Gold Academy Award for The Loneliest Road. His recent (2005) production of Normi Noel’s No Background Music, featuring Sigourney Weaver, also received a Sony Gold Academy Award. Whitehead is a frequent performer in literary cabarets and mixed media theatre events, as well as a featured guest speaker at conferences and audio festivals throughout the US and Europe. He has collaborated with Mark Sussman and Allen Weiss on a Theater of the Ears, and has also experimented with small-scale puppet and toy theaters. He is co-editor of the influential anthology of writings on the history of radio and audio art, Wireless Imagination: sound radio and the avant-garde, and the author of numerous essays that explore the politics and paradoxes of radiophonic space."

In the 1980s he produced a whole bunch of tapes, usually with just one side used and can be funny and disturbing. Some of this were compiled on 'The Pleasure Of Ruins' CD by Korm Plastics in 1993, but all material here taken from the original cassettes

Thank you so much for this post. His work is awesome. I have his Dead Letters cd and it remains one of my alltime favourites! Can i recommend you the works of Randy Greiff, especially the Alice in Wonderland boxset.Splendid sounds...

i won't post dead letters since it's complete on CD and also none of the greif cds, as i don't cds.

but yes, they are all great...

I did not ask to post them because i own all of them :-) It was just a refference.

and i was making sure nobody can expect it from me :)

this is very interesting, thank you.