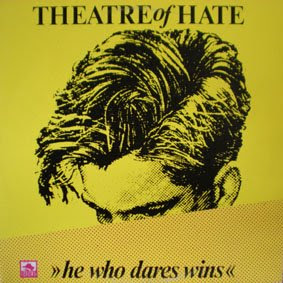 Early 80s new wave rock band with members: Kirk Brandon, Stan Stammers, Billy Duffy, John Lennard, Luke Rendall, Nigel Preston, which were quite a popular band. There are various titles with 'He Who Dares Wins', some of which are bootlegs and one is an attempt to stop the bootlegs. I think this one is a bootleg, but I'm not sure. There is the track 'Poppies' here, which I believe is the same version as was released by Vinyl Magazine on flexidisc - another favorite of mine. This album was recorded live in Berlin in 1981. Theatre Of Hate still exist, see their myspace.

Yeah ! Theatre Of Hate is a very good band ! Thanks a lot for the upload