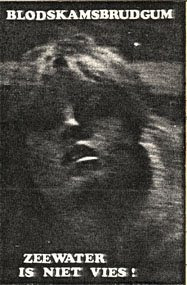 From Dikyl Brobojo I posted some music before. This is a split tape with a video soundtrack by Dikyl Brobojo on one side and four tracks by Markus Arvidson, also known as Arvid Tuba on the other side. Come to think of it, I think its this guy who released the 'The Neckparty', which I posted earlier. The Brobojo is nice electronic while Arvid Tuba plays rhythmic industrial music, in which the voice plays an important role.