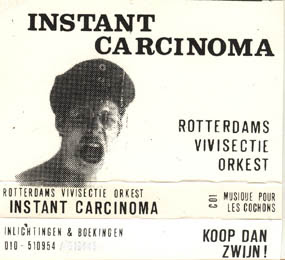 One day I got home, and somebody had dropped this in my mail box. Actually this post is number 700! This is what he wrote about this band:

Rotterdam Vivisectie Orkest was the project of Michaël van der Tak, a very private expert on the history of Nazi-Germany, the French Revolution, Wyndham Lewis, Celine, Emma Goldmann and more (even more private). The collaborating musicians went on to form a (typical end of eighties-style post-Birthday Party-style) rockband Spasmodique; vocalist/guitar-player Mark Ritsema used to mention his roots in the Vivisectie Orkest on his site, but for some reason not anymore. Nowadays he's part of Mecano (yes, the orig. one) and on touring regularly with John Sinclair, the former MC5 manager (for whom John Lennon campaigned, to get him out of jail—for smoking marihuana).
One can trace the Michaël's vocal stylings for a large part as compensation for his day-job at the energy company, where he was employed at the complaints desk. Still, one might feel, that Michaël sure does complain a lot—but that comes very natural with the (Rotterdam) territory. For sure, there will have been gigs at the time of the cassette's release, but surely they will have been pretty much limited to the Rotterdam Jazzbunker, at which rehearsal-space annex stage Michaël, alongside Hugo van Rooij (Carbolic Acid), Henk van Schaik (Debiele Eenheid), Rob van Schaik (Ret Marut), Yola (Ret Marut), Gerard Kranendonk & Lukas Simonis (Dull Schicksal) booked gigs and published poetry in the the joint's monthly programme-booklet Nigredo. Later on Michaël did a lot of hard core free improvising, in Blowjob (inc. JW of Bat Attack and Figurehead), even played in the band Na Und (which included Victor Snijtsheuvel, guitarplayer with Dull Schicksal) but mostly solo. Nowadays, his main activity is playing in Wijntak, a free-impro duo with Wijnand Lammers (drums).

wow so you're saying that michael vd tak & john lennon are related. that's so cool...

I just found the 7inch single I mentioned in the previous comment, it is publication 004 and the label was MCCB from Vlaardingen. MCCS stands for Mass Culture Control Bureau, it has 2 tracks (1 on each side of course). It is folded in a double-sided a3 black and white poster with lyrics end photos on it. 001 + 002 were by a band called Red Balune and 003 by the ex Henry Cow member Geoff Leigh (who recently played at the Belgium KRAAK festival). 005 is announced olm the poster and that one is by a band called Black Sheep.

All credits for the music of this great tape go to Spasmodique's bassplayer Martin Docters van Leeuwen. He created it, played all instruments and recorded it at home on his 4-track recorder. Only the track 'Vuil' was done in Spasmodique's 8-track studio with me on guitar and Reinier Rietveld (Spasmodique) on drums. Martin also discovered Michel van der Tak in his flat block in Capelle aan de IJssel where young Michel still lived with his parents - unsocially and writing poetry like submachine fire pointed at humanity.
After release, as a band/project we did two shows in Rotterdam - one at the Jazzbunker and the other at a band-contest in De Doelen. We sadly lost.