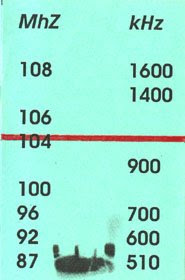 A collaboration between the Dutch project Kapotte Muziek and the German Telepherique. They gave eachother raw sound material to work with, based on radio and shortwave sounds. Telepherique does a pretty noisy job, whereas Kapotte Muziek is more ambient/industrial. I think the Kapotte Muziek piece (which is in five unseparated parts) was also released on the CD 'Verder', but it might be a slightly different version.