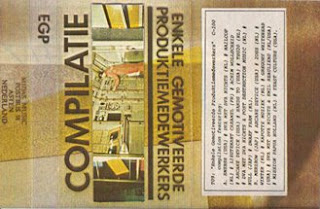 It turns out that one fan of this blog is DMDN, who runs an excellent record shop in Tilburg called Antenne Records. He sells lost of dance music, but online also many experimental stuff. DMDN used to run A Tapes in the very early 80s and then Midas Tapes, turning Midas Music later on. Also he had a label called Supreme Tool Supplies. DMDN played as Death Pact, is still a member of THU20, also nowadays a member of probably the oddest metal band Bunkur and once of Lewd. And a great DJ. Does he ever sleep we wonder? He donated a whole bunch of Mp3s from his label(s) for this blog and to celebrate that great event we start with a likewise great compilation 'Enkele Gemotiveerde Produktiemedewerkers' (some motivited production workers). It includes Smersh, Dva Met Dva Nichts, Mailcop, Lieutenant Caramel, Achim Wollscheid, Arcane Device, Hands To, THU20, Dva Met Dva Nichts & Post Destruction Music, Null, Dwarf Farm, Merzbow, Arcane Device, IOSS, Winter, Kapotte Muziek, Gregory Whitehead, Dva Met Dva Nichts & Emil Beaulieau, Mission Papua Holland, Yeast Culture.

Not for sale (but who knows, maybe from Antenne)