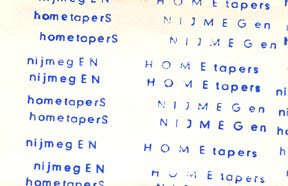 Call me old, but sometimes I am surprised to see posts from me on other blogs. I have nothing against that, but it would be nice to point the source where you go it from, and thus make some ad for nice other blogs. When I left a comment somewhere about this, somebody thought I was claiming copyright, for 'things that also got without paying respect to copyright' or something along those lines. That's not the case. But unlike many others my presence on the internet is not because I want to be, but because I think I have something interesting to share. Once I have nothing share I will stop. That's the main difference between me and some other bloggers (or rather me and the rest of the internet world; I am neither part of any social networking - if I want a social network I go to the pub). Another objection against using stuff from other blogs, is that its almost the same as taking something of Soulseek and blogging it. You never know if you got the real thing, in its complete form and that's simply I am very much interested about (and not because I upload info on Discogs, because I don't, but rather because I know some people who do use downloads to do that and would you want your Discogs with mistakes?). That's why I and my fellow bloggers whom I know personally and trust, only post things we have and that in itself is no guarantee its complete, but its not lifted from some other blog or soulseek. So next to my computer is an obscure compilation tape from Nijmegen, The Netherlands with electro, minimal synth and poppy ambient. I never heard of any of these people, even though I'm from the same, not so big city. Paul Spannenberg, Peter Hoeke, Rob/Bernard, Jos/Inuit, two Guys, Phil Castio and Enrico Fiasco. Its released by Element Tapes, of whom I never heard again.

just feel the need to further clarify, because there's a main point here i'm not sure has been understood: i did not "steal" your mp3s and repost them without credit. is it hard to consider that my sources, through donations, requests, and my own personal hunting and gathering, might strike upon similar territory as yours? i didn't realize that once ONE blogger out of many has posted this material, that meant it was off-limits for all others to share and enjoy. that seems absolutely contradictory (hilariously so) to the nature of what we do, and that's what flat out angers me. who are you to claim such snobbery and ownership of these mp3s. you didn't write the songs, you don't own the copyright, so why is it such a sin for someone else to share the same music you have? does every blog have to own every single piece of material they post, or have to have 100% exclusive material to justify their existence? where is the rulebook, if there is one, and why haven't i received it? that is what is baffling about our discussion so far. i understand that a lot of work goes into tracking down and ripping these original recordings, as i have done so very often myself, but the second you make it available for mass download, you sort of give up any entitlement to your rip.

call me naive, but isn't that the point from the get-go? to get this music out there? where's the harm in something being reposted? as i've pointed out..i'm sure our blogs both share some of the same readers and fans, but yours has a readership that may not know of my blog, and VICE VERSA. as pointed out in my comments, people have reposted some of my own exclusive album rips, and to be honest, i couldn't care less, as long as that music is being enjoyed by as many as possible...

last i checked your entry, by the by, you didn't even do that much the work involved with posting the storung tape, aside from digging up a similar batch of information that i did. are you kidding me? you put up a few sentences about a release someone gave to you, and expect me to respect your trailblazing work? AGAIN: i did not steal your words (and AGAIN, did not download your tape from your pages and repost it).

so, in conclusion, i happened to COINCIDENTALLY post something you already had posted (ages ago, in a back log i can't possibly navigate with ease, nor know where to begin), and meanwhile, i have added my own personal and informative touch to it and offered it to a potentially wider audience. so be it. get over it. you didn't make this music, you and i are simply among many necessary catalysts for it to be heard to begin with, so why the hell are we even debating this? this isn't about us, or our egos, it is about the music at hand, which should be enjoyed by as many people who are willing to listen.

and sorry for the long-winded replies. keep up the good work.

i am glad to hear my ranting and raving has at least been considered- it goes a long way and i'm always grateful to meet folks who are open to new ideas. i do agree with some of your points as well, and finding that there's a lot of interesting perspective to be gained from running blogs like these.

i would definitely like to chat more over email, so stay tuned and i'll be in touch shortly. otherwise, looking forward to digging further through the back logs, and soldiering on!

Well I enjoy both of your blogs and I hate to see the two of you squabbling like this. Now apologize and shake hands or even hug. Damit

I personally love your Blog and all it has done for my ears. I also very much appreciate your attitudes about the internet , and of course music. Though I am not a part of this conversation, I just want to say this in the hope that you can avoid the cynical nature of the internet and stay enthusiastic about you incredible blog.