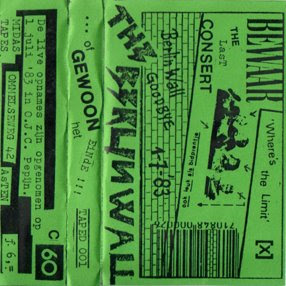 Before Midas Music there was Midas Tapes and before that there was A Tapes, all run by Jac van Bussel (DMDN). The Berlin Wall was a band he was in, along with Petra van Bommel (Voice), Bart Cuppens (Guitar) Jurgen Jeninga (Drums) and Jac on Bass & Voice. On A Tapes there was a released called 'Heesters & Thuyes', but I don't have it. This tape, the first one when Jac switched names to Midas Tapes, contains the last recordings by the band, who hailed from Asten, The Netherlands, including their final concert (next week exactly twenty-six years ago in fact). A bit punk like, but charming naive with small interviews (in Dutch) in between.