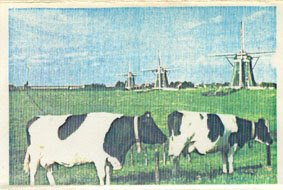 I was looking for a good oppurtunity to mention the blog by Beequeen with all their live recordings, and today's post is the right one. 'The Netherlands' is a compilation with only bands from the Netherlands (duh) and was part of a larger series with other countries. I remember at least two volumes from the USA, Germany and France - I no longer have them. On this volume the omni-present Kapotte Muziek (who borrow this one to me, and Frans says that his track should be called 'Audio Plagio 6' and not 'Audio Placio 6', as it says on the cover) and Odal, also Gorgonzola Legs, Weltschmerz, Dva Met Dva Nichts solo and with PDM (another moniker from Frans de Waard then), Winter (being Peter Duimelinks of THU20, Kapotte Muziek, Goem), Honeymoon Productions (being Freek Kinkelaar of Beequeen), Splendor Solis (the guy that ran Interrupt, of whom we we put some tapes up too), Y Create, and Beequeen, with a cut from their first concert ever. Also there is John V (not to be confused with John P of Zimbo), this is John Valkering from Egmond binnen) and Havre (which is also a misspelling,it should be Hafre). Both of them were part of Egmondse Klank Obsessie, and I will put some tapes up from them too in the future.

thanks a lot for upload... i really love the audio plagio track... this is the 3rd i know and all of them are absolutely great... would like to see/hear them sometime all together compiled on one cd... pls forward this to mr.de waard

he visits this blog regularly, so he will see this. i borrowd some of the comps with KM on it. i'm not sure if such an idea would appeal to him. but perhaps if a CDR label asks him? who knows