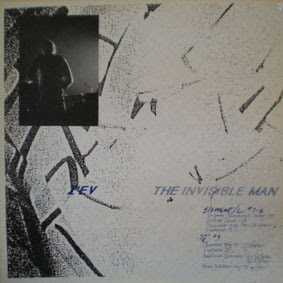 "The Old Sweat replaced the title 'Pounding The Pavement', and The Invisible Man finally surfaced. This is a sorry saga. Phil S. of the then Coercion label contacted me for something to contribute to a compilation. Normally I do not with compilations (with one or two exceptions), but for some reason I consented, and he came back that Coercion wanted to do individual LPs and would like mine to be the first. I warned him not to, but they went ahead anyway. Red Rhino was doing the production and distribution, the product was completed (my test pressing is in Ursula Block's archive at Gelbe Muzik in Berlin), maybe a few copies were sold, Red Rhino went into liquidation, and that was the fat lady's song. This was the first time I turned tapes over to someone, and they assembled the record. I was satisfied when I heard the test pressing. Cover by Andrew McKenzie. I ended up with a box of 25, and that's going to be my retirement fund!" - From the liner notes of Z'EV's 'One Foor In The Grave'. The Invisible Man has six variations of 'Element L' and 'Q #3', the b-side 'The Old Sweat' remains unindexed and has various live pieces. Despite the story about only a few being sold, I got mine pretty cheap.

no. i never ever did anything on ebay. or soulseek for that matter. you won't find me anywhere there.