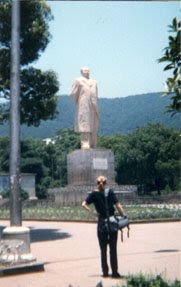 Recently the name Dikyl Brobojo popped up on various compilations. Today a full release by him. I believe his real name was Dick de Booij, from Den Helder and ran a cassette label called De Koude Oorlog (the cold war), was a member of Szarkov (more of them later on) and played solo music as Dikyl Brobojo. Experimental, electronic music, with a strong fascination for Russia and China, especially communism. This release seems to be made with field recordings from China and casio keyboards.

that tape is really good thanks..

many many thanks dick de booij was a good frend a big insperation for many people he did also a lott off audiovisual stuff .he past away about 13 years aggo he was 32.

i didn't know this. shit. i will post some more from him, but i don't have his entire catalogue.