The Ex/Morzelpronk+Nico/Zowizo - Support The Miners' Strike (LP by Records Against Thatchsim rat 001, 1984) 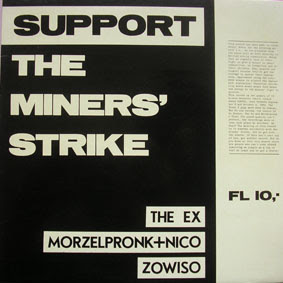 Ok, I know. I said it before, but I do have more cassettes to post than vinyl for the time that this blog may last. But I did a lot of tapes lately, so I promise to do some more vinyl, and hey why not, some more Dutch punk. This benefit LP was 'made to raise money! Money for the striking miners i.e. as the proceeds from the sales will be sent directly to British mining communities' as it reads on the cover. There were 15 concerts, the first three by The Ex, Zowizo and Vacuum, and the last 12 by Zowizo, The Ex and Morzelpronk. The recordings aren't the best around, and hard to be separated - I gave up.

cheeers! was looking for this one