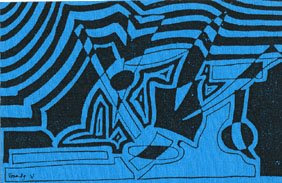 The second trilogy this weekend is a look at the small Dutch village Egmond aan de Hoef. Here hailed a pretty active group of musicians, around the brothers John and Fred Valkering, who recorded solo, as well as with bands such as Comrades Creating, Hafre and Dust & The Minds. They had a label called Egmondse Klank Op-sessie, of whom I will be posting some tapes in the future. Today however three tapes they released on Lor Teeps, from Amersfoort. One tape is by Hafre, one by John Valkering and one is a split by Slowval and The Art Corp. Except synth music by Valkering, experimental stuff by Slowval and The Art Corp and rock avant-garde by Hafre.