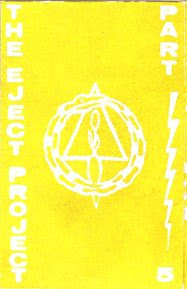 This weekend I have two postings which include five releases in one series. The first is 'The Eject Project', as released by Egmondse Klank Op-sessie. Four C45 tapes and one C60. A bit of a strange affair, certainly with the first two, where they just list who contributed, but not the order of the tracks. The later three have band names per track, and number five is the longest and most varied one. As far as I can judge only Dutch bands: Slowval, Range Day, Un Voixm Emmy van Egmond, John Valkering, Valdig Fer, One Voice, Edgar Jacobs, Szarkov, Little Seed, A.D. Eker (of De Fabriek fame), Boris, Art The Corp, The H.E.S.S. Group, Hafre, Post Mortem, Tijd Is Geld, Linefarmer 117, Uzi, Militia Chresti, Honeymoon Production and Kapotte Muziek. Many electronic music projects around, but also some more rock outings. More from this label soon.
one
two
three
four
five
Posted by 433 RPM at 9/27/2008

Dear 433 RPM,
Thank, thank you very much, for what I thought was lost in the mists of time - or a noise-to-signal ratio -
Cheers,
E. van Egmond