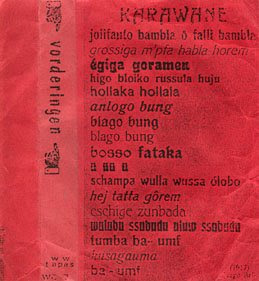 No doubt one of the more stranger guys from the Dutch punk scene was Jan van den Einden, who was foremost a writer in which he showed a great talent for offensive language. I have various books published by Erik Vloeberghs in which Jan also contributed letters and they are funny, at least, if you are not the receiver. Jan van den Einden also played in various bands, like Second Auschwitz. On his label WW Tapes he also released a whole bunch of tapes which are spoken word related. I only know this one, a double taoe with mostly poetry and talking in Dutch by Jan himself, Henk K, Guy de Bievre, Didi de Paris, Flurk Notschaele, Erik Vloeberghs, Paul Citroen, de Ridders van het Ronde Meubel and in English by Andy T, Gill, Wild Man Fischer, The Redundants, Chris Larkin and in spanish by Salvador Dali.