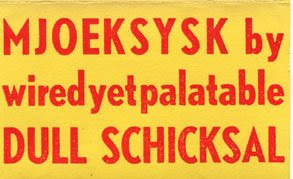 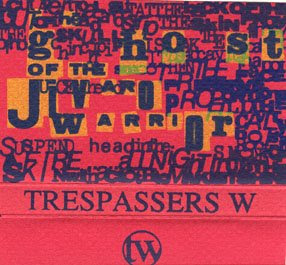 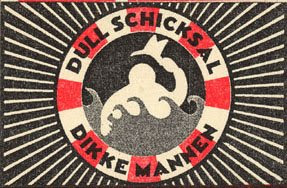 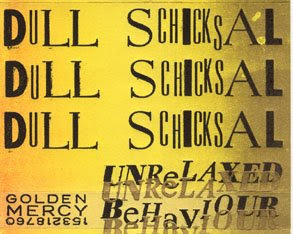 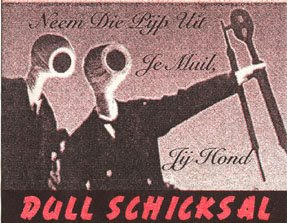 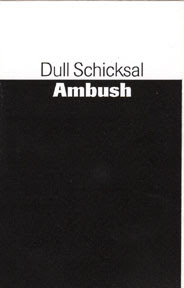 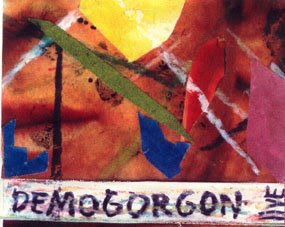 Less obscure, from the same source, is this rather big post with music by Lukas Simonis. He's a guitar player from Rotterdam and played in lots of bands in that city, as well as being a solo artist. This post deals mainly with his work with his band Dull Schicksal.
From his website:
"Lukas Simonis has his roots as an instrumentalist and musical 'activist' in the industrial music and noise rock of the Eighties ( Throbbing Gristle, the Residents, Pere Ubu, Sonic Youth and beyond).Being a part of the Rotterdam jazzbunker scene (a collective that consisted of heavy drug induced punk rockers, freejazzers, early electronic musicians and pre-postrock combo's) he discovered the delimited world of improvisation. In the meantime & after he played in bands like Dull Schicksal, Trespassers W, Morzelpronk, AA Kismet, Liana Flu Winks, VRIL and Coolhaven. At the same time he was organizing concerts, events and films, first at the Jazzbunker in Rotterdam later on the Dissonanten festival, the Dissidenten festival, Popifilm, Dodorama and finally WORM, a multimedia centre for experimental art.
Nowadays he collaborates with lots of people from different backgrounds. For instance; Apricot My Lady (with Ann La Berge and theBohman Brothers), Vril (with Bob Drake, Pierre Omer and Chris Cutler), Goh Lee Kwang (Kuala Lumpur), Jim Whelton (London). Pierre Bastien(Paris/Rotterdam), Dave Brown (Melbourne), The static Tics (with Henk Bakker and Steve Beresford), Eugene Chadbourne (USA), and lots of other people. He's still involved with WORM, mostly working in the elctronic studio and making radiophonic pieces. It’s only since appr. 3 or 4 years that Simonis started to play solo-concerts, after (and before) the release of his first solo album, STOTS, which got a good reception."

In this post five tapes by Dull Schicksal, of which three were also released on CD, 'Dikke Mannen', 'Haal Die Pijp Uit Je Mond, Jij Hond' and 'Ambush'. In the third zip you'll find more music by Lukas from the band before Dull Schicksal, Demorgorgon. Part of that was already on the V2 3D compilation posted earlier and this release was made for this evening. Simonis was also a member of Trespassers W, and I have nothing else by them, except this tape, which I also borrowed from the same source. This is the most normal typed rock music. It's a big post...

Thanks for ripping all these tapes. I'm downloading the Trespassers W since I've enjoyed some of their records in the past.

quite typical of the french to write in their own language. do they still believe the entire world speaks this? curious. but who knows, maybe there is someone who understands it.

too bad that the bloggers who post a comment here are only interested in the stuff they allready know -trespassers w!
Trespassers W and Dull Schicksal had a period in the eighties when they were living parallel-lives. Meaning; they had almost the same crew but different concepts. Trespassers W was (and still is) the vehicel of Cor Gout's great lyrics, while Dull Schicksal was the more experimental direction, while still working under the sign that says 'Rock!'
In the nineties Dull Schicksal was develloping more into this weird and wonderful 'anything goes' direction, and DIKKE MANNEN might be considered as one of their masterpieces.
(to be continued, have to go now)

The Dull Schicksal stuff is also released on CD. And some of them are still for sale here; http://www.z6records.nl

The issued cd's are; Dikke Mannen, Neem Die Pijp Uit Je Muil Jij Hond and Ambush (their last). Mjoeksysk By Wired Yet Palatable and Unrelaxed Behaviour are released on cassette.

Another interesting CD from the same 'scene' is 'estos noson pagagos' -the band by Dull Schicksal trumpet player Frans Friederich and electronic wizzard Robert Kroos. It might be still downloadable on the Mutant Sounds blog.

The Demogorgon tape is a set made by Lukas Simonis and Ronnie Krepel, both in D.S. and Trespassers W. It was made for a V2-project -when V2 was still situated in Den Bosch. It's dutch lyrics
& old rhythmbox & organ.

By the way; The last Trespassers W CD 'The Noble Folly Of Rock'n'Roll' (2007) was made by the old crew from the eighties who played on much of the posted stuff here.