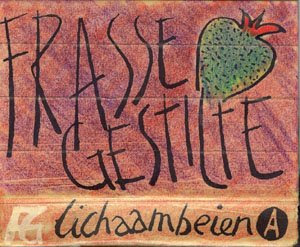 I think I may know someone involved in this release on any level - be it music, or be it the cover - and that person has his birthday today - happy birthday. I borrowed a whole bunch of cassettes from a mutual friend and I'll be posting that in the next few days. Some of that is truely bizarre and obscure, and this is certainly one of them. Knust was in the 80s a squat in Nijmegen where people printed comics and magazines with lots of colors on ancient stencil machines. Also musicians played over there and it was a funny, lively and free scene. Out of that scene came Extrapool, which is to this very day a great funny place for music, art and the print place this exist. They print for loads of people, but sometimes have their own publications. According to my friend this might be the only cassette they ever released. No names on the cover. The music is no wave, postpunk and experiment. No doubt only a handful were produced.

I vaguely remember there were 2 cassettes, dunno if i still have the other though ...