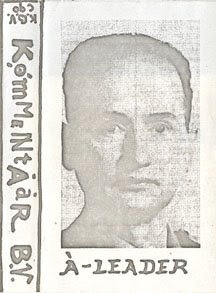 Actually the main idea to borrow a bunch of tapes was not the weirdness of yesterdays, but because my friend was concerned that my blog lost a bit of that obscure Dutch punk edge. Pretty much everything I have is already posted, and since I only post things that I actually have had in my hands means some stuff is left out. There is another record collection in town which I need to inspect. So my friend gave me this highly obscure punk (?) band from the small Dutch village of Aalten of which I never heard nor have other information of. One side is recorded in a garage, the other side have basically the same songs but then recorded live in CSA in Aalten in January 1982. Nice crude (post-) punk songs.

lovely, thanks a lot for this obscure material.