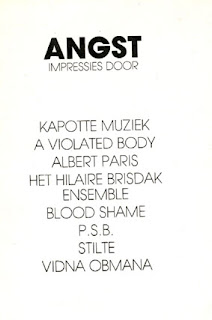 Bummer! I borrowed a whole bunch of compilation cassettes from Kapotte Muziek, and with my own rest of the tapes still waiting, my cassette deck broke down yesterday. No tapes were hurt in making this blog. Kapotte Muziek had been involved in many compilation cassettes in the very early years (1984-1992) and of course Frans de Waard still has them. He asked if I'd be interested in making MP3s of them, and he would write some comments. Here is 'Angst', a double sixty minute tape about fear, released by Therapie Organisatie. Frans says: "for my piece I recorded my father's voice about fear. Its a bit of an early radio play like work. The visuals in the box were made by me also. I thought the piece by Stilte is a bit stupid, its just silence." Also included are A Violated Body, Albert Paris, Het Hilaire Brisdak Ensemble, Blood Shame, PSB and Vidna Obmana. I just made a scan of the front.

Is there any chance for a re-up?

Anyhow! Thanks for all these interesting music. I am following your blog for years and with pleasure =)

if you have been following this blog for years, how come you never noticed: report broken links through e-mail, not as a comment?