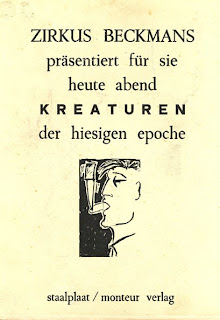 The final release I have here from Staalplaat Documentation series and it's by visual artist, cook and musician Fredy Beckmans. At that time he was very much into the circus acts and did a performance which is captured here around that theme. Quite a nice one. With partner Ynse Vugts (who also had a release in this series) he did performances playing a saw and an axe. Their label was called Monteur verlag, but I don't have any of those releases. These days he is more into cooking and building bird cages. No scans of the booklet.

hi, i've made a list of the cassettes released by staaltape here : http://nostalgie-de-la-boue.blogspot.com/2008/05/staal-tape.html
but i had never heard of that one !!!
does it have a catalog number ?
and do you know what is ST 00U of the Documentatie Serie ?
thanks !

oh shit. my mistake. its not from the documentatie serie, but confrontation series. on top of my head i don't know st 00U, but let me think for a while. send me an e-mail so i remember