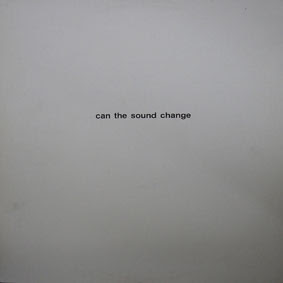 So last week I was transferring various Touch Tapes, like Meridians 1 and 2, Touch Radio, Magnetic North and looking do Touch 33 ('Islands In Between') and Behzad 'Myth', but Touch doesn't like me to make this public available. So today, something else.

Of course you have to know that this album is by SBOTHI, otherwise it's hard to tell. The cover is all white with on one side 'can the sound change' and on the other 'the change can sound'. S.B.O.T.H.I stands for Swimming Behavior Of The Human Infant, the 80s nom de plume for Achim Wollscheid, who released a bunch of records and collaboration with P16.D4 on Selektion, and with Merzbow. In the nineties and beyond he worked under his own name, these days more with art than with music. Discogs lists 4 tracks or so per side, but I couldn't see where they start or end, so I left both sides unindexed. Nice scratchy copy, since I played mine on the radio a couple of times. Nice one.

I only know this band in some compilations like 'Testament'. Very Interesting this record.
Thank You!

I bought this record second-hand in 1994-1995, in a small shop in Antwerp. Never had a clue who recorded it. I remember listening to it in the shop and the slightly amused look of the shop-owner.