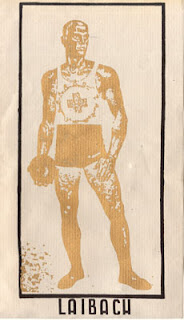 Some days ago I posted the tape by Zirkus Beckmans, and I made a mistake. It's not part of the Documentation series but the Confrontation series by Staalplaat. The Documentation series started out a series of live recordings from Amsterdam's NL Centrum and the first two releases were Last Few Days (already posted) and this Laibach release. Also included a recording from De Kapel in Den Haag, a show organised by Pidoewa's Tony Blockdijk.

Thank You For This release,
I have a bad copy of this and is great to find a beter one.
Greetings
Jorge