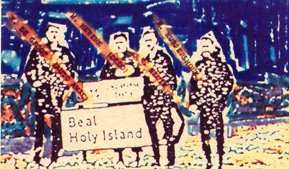 And to stay in the corner of Finger In The Dike, there is also this tape by Daask. I believe that this was a group of film/video makers, and this tape of course only contains the soundtrack, as recorded by Sluik/Kurpershoek. They worked together from 1982 to 2001 on music, video and visual art. Staalplaat released a CD by them. According to Frans de Waard's cassette catalogue Finger In The Dike released this, but the small booklet mentions Staalplaat. I gather just for distribution. Oh well. Nice industrial music.

I know that all the posts with files on Xirror have been removed and I am re-loading them on Share On All. Try again in the next few days for those.

where did you find that one?

An audio scape of an audio-visual Tour 1983 through England with performances in London Coop and The Basement Newcastle and some place in Brighton.

Underestimated history, if i am allowed to say so.

Give it a try!

i bought it in staalplaat i guess, or perhaps got it from finger in the dyke. that long ago :)