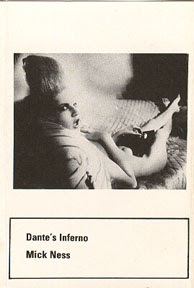 I know, I should try to post the 2 LPs released by Mick Ness, an Amsterdam band, but I don't have those. Instead I have this. Mick Ness' real name is Mick Witkamp, who started to play music in 1975. After 1997 they are part of the Dutch no wave Ultra movement, with a drummer on a metal drum kit, saxophone and Witkamp on vocals. In this period they make the recordings for this tape. Later on they are less experimental and more Joy Division like. From 1989 Mick Ness is the frontman of a Hungarian band Sexepil.

On this tape there is also the French band Dante's Inferno, of whom I know nothing. The thing was released by Tago Mago, the infamous French magazine, who had a department in Holland at that time. I must have it somewhere, but not here where I live. So only the music.

i presume in this post you meant 1977 & not '1997'? just a hunch. oh btw, this is by far my new favorite blog. yes, i'm the guilty one who's been going thru all yr old posts & downloading everything you posted years ago, now that i have the hard drive space. so again, thanks so much for keeping this incredible resource & the veritable treasure trove of auditory post punk platinum online for so long.