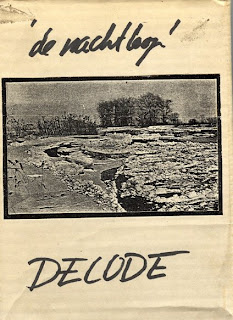 Decode was a group of Quirijn Kuchlein, Ben Hollander, Reiner Swart, Chris Janssen and Marc Kuiper. They use tape-loops with shifting rhythms and sounds which they called 'combatritmiek'. Both sides have two tracks but the b-side was impossible to separate, so it comes unindexed. They also had a project Metaalstelling, in which they performed on metal, but I don't think anything was released by them.