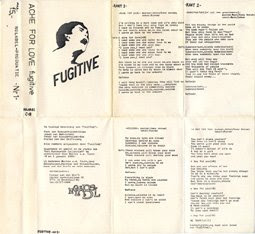 Someone named Pieter wrote me some two weeks ago, saying how happy he was he found music of his band Fugitive posted and we exchanged some e-mails. In the end he send me some more music from his band. The four songs of 'Ache For Love' were released on cassette, and the four from 'Poisoned Desire' are unreleased, but were recorded in a studio. They started in 1982 as The Axe and Pieter joined as singer in 1983 and the name was changed in Fugitive. In 1986 they changed their name into A Fugitive Of Mercy, more on them later. They stopped in 1988. Great doom rock!
Ok so Pieter was very kind and send me a box of records and tapes to share with you. Which I will be doing the next week. Since I am again gone for a few days, this post is for saturday, plus two more of his donation for sunday and monday.

This Fugitive music is great. Thanks for sharing.

You're too kind! Thanks!

It's nice to see Fugitive on your site. This is one of the bands from Boskoop. They used paintings, movies (Super 8) & slides when they had a concert.