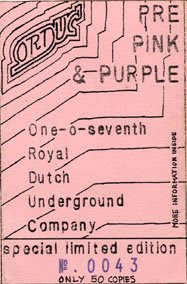 In the early days of this blog I put up 'Pink & Purple' by O.R.D.U.C., today, towards the end of this blog, its time for the cassette version of that LP, which preceded the LP. I wrote back then:


"The name stands for One-O-Seventh Royal Dutch Underground Company and was led by Nicko Selen, who ran also the label, and later on IF Records (more of those records later), along with friends who played guitars and drums. Highly naive electronic music, partly inspired by krautrock. Released in an edition of 500 copies in five different coloured vinyls, each 100 copies. I think I have a lathe cut somewhere too, if I find it I will post this one too, one day. The band apparently still exist, they even have a myspace page."


Since then I have been in contact with Nico Selen every now and then and posted some stuff from his label. This cassette was a taster for the LP, and it has a coupon which you could send in to say which songs should make it to LP. I think I got the tape after the LP release, so I still have the coupon.