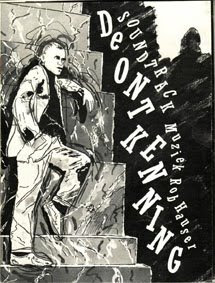 Finally Dr. Freakowitz returns after some silence, with three posts. This is the first one, in which he gives a pretty unknown tape on Ding Dong Records & Tapes. Its music by Rob Hauser for a film by Orkater, made for the VPRO TV. Ding Dong's Ignit worked at that time for VPRO Radio ('Spleen' if you care to remember), so short ties on releasing this. Back then I (433 RPM) thought this was all pretty 'official' art business and it sucked that cassette releases were used for that. Now I think its pretty ok chamber music; I am so much more mild now.

I remember an Oor interview about the cassette scene from around 1983, where Ignit was putting down the primitive "shitty xerox-copied" kind of cassette releases. I was pretty mad because those were just the kind of tapes I put out!