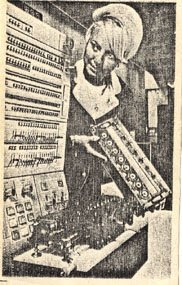 Perhaps the shortest tape on this blog, as it lasts 10 minutes only. It is an one-off project by one Frank de Munnik and one Herbert Capelle, who were a member of Planung. This band from Enschede had a flexi disc with Dutch magazine Vinyl and I added their side of the flexi to this post along with the article (in Dutch) about them. This cassette has a solo piece by each. "Confused Reaction" is by Frank and 'Fields Of Force' is by Herbert. I know Planung released some more cassettes, which I never heard, but I would be keen to hear them. Planung is more of a band, no wave like, with influences of Cabaret Voltaire and A Certain Ratio, whereas the tape is more electronic.

I posted this on my blog a year and a half ago. Please remove...Haha just pulling your leg. No other blog out there touches 433's obscurity.