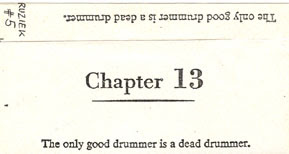 Things may not get obscurer than this. What you see here is the entire cover, but apparentely (according De Nederlandse Cassette Catalogus) it is released by Ruziek, a label from Utrecht, run by J.P. Kuil, who was the main man behind Vacuum. The label partly released punk and partly experimental music. This tape, according to the Catalogus, credited to El Ctrosan, belongs to the latter category. I guess its not surprise, when I say, 'and that's all I know'.

I´ve just found this place, it was love at first sight. You have great music here, the Genf album you posted time ago it was wonderful by the way.
Greetings from Argentina.

ruziek#5 was a totally different tape
this is a scam
no such thing
greetz:
vacuum rob

well, vacuum rob, then what is then? i got his in this 80s, i think. maybe through staalplaat or maye through ruziek. oh and i'd love to post the vacuum lp, but i have no cover of it. if you have a picture of front and backside...

first or second album?
can scan it for you

first or second album?
can scan it for you

i am not sure, i am at work right now, so away from my beloved hard drive. both?