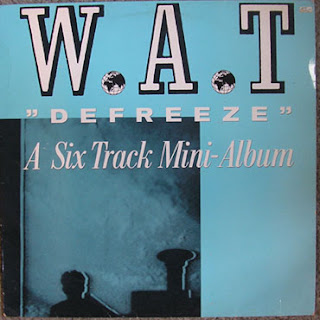 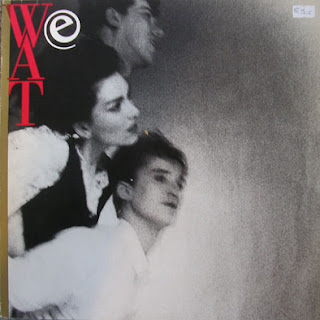 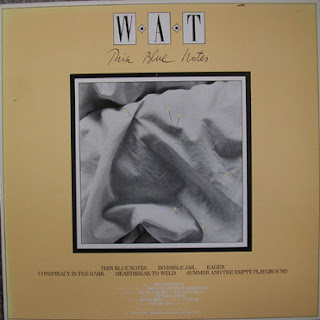 Quite an extensive posting, all three albums by The Netherlands' World According To (W.A.T.), a group around Ad Van Meurs, on guitar. Before he was in Bleistift and today plays americana as The Watchman. This group was with Ankie Keultjens (his wife and also in The Wtachman) and Frank van den Nieuwenhof. As W.A.T. they played rather uncomplicated synth pop with a drum computer, synths and lovely vocals by Ankie. Van Meurs plays already much slide guitar here, which gives them a rather distinct sound. As far as I know they recorded three albums, of which the first one, 'Defreeze' still stands as a powerful synth pop classic. There might be a fourth one, but perhaps that was never released. There are two uploads here, the first one is 'Defreeze' and a live recording from around the same time as they released this, though not the greatest quality. Their second and third release are in the second folder. 'Defreeze' and 'Thin Blue Notes' were both mini LPs with six tracks, and 'We' is a full length LP.

i am not sure what or why is wrong, but here is another upload of the same file:

its full now, it works!

Any idea where and when the live stuff was recorded? Gracias, Frank

sadly i don't. i recorded it off the radio, and i remember it was around when the defreeze was released. i believe it was a bar in amsterdam, but i have no idea why i think this. so somewhere late 1983 or early 1984.

Thanks! Great to hear the first two albums again. I had never heard the third (Thin Blue Notes) and I like the way they were going. Too bad the record company lost faith for the fourth album (I assume that is the way it went).

Bit late, but happy to have found this blog.

Can't open the live recording, but I guess it was taken from a sunday afternoon concert at the Kakatoe-bar in Amsterdam. Recorded by the VPRO. For those who are interested. Got some other live recordings to. Just send me an e-mail.

By the way. All three W.A.T. albums are digitalised and available at www.fonos.nl

Just listening to the first EP which is just wonderful! So original, so fresh, so well played and well produced. This is one gem, thank you very much!!!

such stellar tracks on these records. i got these from you a ways back but been a while since i've given them a spin.

just realised that the last track on the WE record ("vive la vie") is mussed up at the end. skips at the end and cuts off abrubtly. any idea what's up there?

odd end to the record, as i recall it