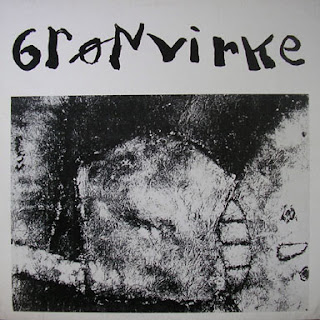 Before you think I'm turning to just Dutch music and with some grief over Rasmussen's kick out of the Tour de France, today something from Denmark. Grønvirkewas duo of Sten Jorgensen on cornet and vocal and Freddy Frank on Electronica and tapes. That's about all I know, besides that according to Graf Haufen's magazine Die Katastrophe (issue 12, 1984) Freddy commite suicide. The LP here says 'mini LP 45 rpm' on the cover but on the insert the sticker says 'play at 33 rpm'. The name of the label is a bit hard to read in the hand writing on the cover, but I think it's Gay Records. It's great slow Cabaret Voltaire music circa their 'Mantras' pieces.

thanks for the everyday post - always a great thing.
i still amazed by the quality of all your posts.
can't for the André de saint obin tape; i was searching for so long to be able to hear them
Thanks in advance

oh well, in that case i'll try to do it this week then.

hi...as a dane its nice to spot this record outside denmark. cool.
The recordlabel is Gry. Also a shop for underground music in the 80ies.
Sten Jorgensen was the leadsinger in the band called sods/ or later:
sort sol, which made aprox 8 albums, all very different from this one. This was the only release from the duo.

Gry records it is, but if I ever start a label I'm going to call it Gay Records simply because the error made me laugh!

Hi there. I used to play with Grønvirke. The band was the brainchild of Freddy Frank. Freddy started as a beat-musician in the 60ties. Later he opened the recordstore "Gry" in Copenhagen. The record was recorded in Freddy's own studio located in the media-gallery "Trekanten" in Copenhagen. The record was released on his own "Gry" lable. Freddy played electronnics, Steen vocal, guitar and cornet. Later Peter Oliver was added on percussion, Ronnie Rocket on bass and myself on electronica. The version played at the Berlin Atonal festival.
Mogens Jacobsen

thanks for your info, mogens!