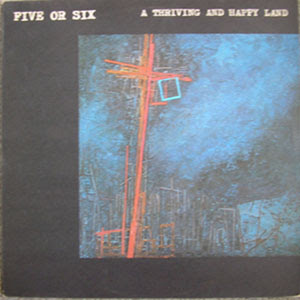 Certainly one of my favorite UK bands, who combined a great pop song with fine sense of experimentalism. This album was ill fated. Frizbee Records, of Amsterdam (connected to the Boudisque Shop and Plurex) had a high hopes of selling loads of copies, but it work out. So coupons in magazines appeared that you could this record for like one guilder, and in the end hundreds of copies were dumped at the garbage. What a shame, since it's a great record, more modern classical than popmusic. I made photos of the cover, which aren't great, but better than having nothing at all, right? The cover is a nice piece of art by Russell Mills actually. It's a great pity that has never been a proper re-issue of all their material onto a nice double CD. More to come here by them, including a live recording from around the same period.

excellent stuff. thank you. never heard of them before your blog.

Hi, apologies for being so late to the party, but is there any possibility you could re-up this obscure curio, I'm desperate to hear it? Hope you can help... (thanks)

is it very hard to read the re-up policy? must be. no re-up

I got one. Never played the record. I should listen one day.