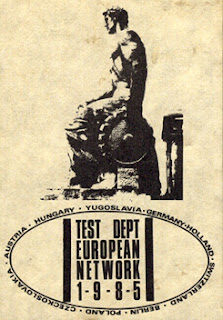 Test Department at their peak, as far as I think. They played The Netherlands in november 1985 and both Staalplaat and V2 wanted to release this on cassette. V2 'won' the bidding war, perhaps because their recording (back then to a 'hi-fi stereo video') or the more art-presence of V2? I don't know, but this is an excellent live recording and quite a popular cassette release in the 80s, alsodue to the fact that it came in a nice black carton box. You'll find also scans of the various inserts, which may have been only part of the first edition.

fantastic blog!
thank you very much for great sounds!
esp. for Hemburg tape!

thanks. let me know if you have requests. i also will do vinyl, pretty soon, when i'm bored with the tapes...

I've been looking for Strength Of Metal In Motion for a while now, you dont happen to have it too?

And thanks for a great blog!

well, i would love to hear some Ensemble Pittoresque?

I don't have strength of metal in motion. as for ensemble pittoresque, i may do their first lp as i don't have the second anymore. on their website (http://www.ensemblepittoresque.net/) you can find some interesting material, but not the live recording i will post pretty soon.

Thank you thank you!!!

I still own the original box+leaflets this cassette came in. Alas lost the cassette years ago. Never digitalized it, so I was very happy to find this blog today! Thanks very much!!